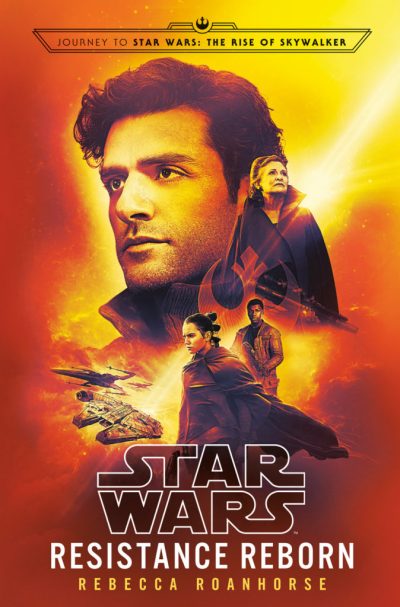 A sharp pain in her temple brought Leia’s thoughts up short. She squeezed her eyes shut in sudden agony. These headaches were a side effect of the healing process, the medical droid had said. She was to expect them to last for a few weeks, but between the headaches, the nightmares of being lost in space, and the grief of losing her friends and family, Leia was exhausted. What she wouldn’t give for just a moment of relaxation, of safety; a few days or even a handful of hours of knowing everything would be all right.

The voice came from behind her and Leia turned to find Rey standing in the doorway. The girl wore a version of the same scaven­ger garb style Leia had first seen her in the previous day, only now Leia recognized touches of Jedi influence in her ensemble. She’s changing, Leia thought, but there’s still some Jakku there that she hasn’t let go. But perhaps that wasn’t fair. Perhaps Rey simply clung to the simple things she knew in a sea of chaos, the way they all did. Speaking of simple, Rey held a steaming cup of something in her hands and when she saw Leia notice, she proffered it forward.

“I brought you a cup of Gatalentan tea,” Rey said.

Leia smiled. “Do you read minds?”

“I was just thinking about how much I would love a cup of tea,” Leia said, saving Rey from her awkward scramble. “Nothing Jedi about it. Just”—she motioned Rey forward—“a welcome surprise. Thank you. And please, call me Leia.”

Rey nodded, looking relieved, and hurried forward. Leia took the tea from her. The fragrance immediately filled her nose, and she could feel the muscles in her shoulders loosen.

“I could get you something stronger if you like,” Rey said, pointing back toward the galley from which she’d obviously come. “I think Chewbacca keeps some caf in there.”

Leia blew across the hot beverage, sending small tendrils of steam floating through the air. “I’m surprised he had this.” Ah, but it prob­ably wasn’t Chewbacca that kept a stash of Gatalentan tea on the Millennium Falcon, but Han. Oh, Han. Gone, too.

“And I’ve made you sad,” Rey said, noticing the look on Leia’s face.

“Not you,” Leia corrected her. “Life. This war. You are a light in the darkness.” She gestured to the seat across from her.

“I didn’t mean to stay. I just heard your voice in here and thought you might need the tea.”

“Well, you were right, and I insist you stay. I could use the com­pany, and you’re making me nervous standing there. Please.” She gestured toward the seat again and this time Rey sat, sliding her hands under her thighs and smiling awkwardly. “There,” Leia said, patiently, hoping to put the girl at ease, “isn’t that better?”

Rey nodded. The two sat in silence as Leia sipped her tea and Rey made a show of looking around the room, gaze floating across the communications board. Leia followed her wandering regard.

“Why aren’t you asleep like everyone else?” Leia asked.

“I know the feeling.”

Rey shifted in her seat, eyes on everything but Leia. My, but this girl was nervous. She hadn’t seemed this nervous when they’d met earlier. But so much had happened since then, or maybe she just had something on her mind.

“I heard you talking to someone,” Rey said hastily. “Did you finally get through to our allies?”

“Not yet,” Leia confessed. “That call was from a couple of pilots I have scouting, but, and I hope this doesn’t come out wrong, we need more than pilots. We need leadership. Pilots are crucial, but the First Order took Holdo, Ackbar, others.” She sighed, the grief heavy in her bones. Leaders she had called them, yes, but also friends. People she had known most of her life, now gone. “We need strategists, thinkers, those with the means and will to lead us forward. To inspire others to do the same.”

Finally Rey met her gaze, a question lurking there. Perhaps she wants to talk about Luke, Leia thought. We spoke of him, but briefly. Just an acknowledgment that he was at peace in the end. But then Rey said . . .

Ah. Leia nodded and drank from her now cooling cup. Rey squirmed uncomfortably in her seat.

“What happened to him?” she finally asked. “I mean, how did he turn to the dark side? He started in the light, didn’t he? He told me a story about Luke, about his training.” She exhaled. “I guess I just want to understand.”

“I think you would have to ask Ben what happened to him.”

Rey’s face fell, and Leia could see the pain etched there. The girl cared about Ben, and he had disappointed her. “Ben has made his choices,” Leia said. “No one can save Ben but himself. And I don’t know if that is what he wants.”

Rey nodded, a sharp dip of her chin. “I know that. I mean, ratio­nally I know, but I guess I held out hope.”

“Hope is good,” Leia said, her voice gentle with understanding. “Hope is important, and sometimes it is all we have. But,” she said, smiling, “what does hope have to do with being rational?” She held out her hand and Rey leaned forward and took it, pressing her palm to Leia’s and squeezing.

“I don’t know how I’m going to do this,” Rey whispered quietly.

“But you will do it,” Leia said, her voice a little louder, filled with a little more steel. “And you won’t be alone. We will be here with you.”

Rey seemed to steady, and a smile blossomed briefly, her first since she’d arrived.

A buzzing on the console and Leia answered. “Hello?” she called into the mike. “Identify yourself.”

“Poe.” She turned slightly away from Rey. “Where are you? What’s your status?”

“Ikkrukk. It was close, but Black Squadron pulled through. Zero casualties although Jess and Suralinda were pretty banged up. But I can report that Grail City is secured. We sent the First Order run­ning.”

Finally a small bit of good news. “Wonderful, Poe. And the prime minister, Grist? Is she well?”

A moment of static and then Poe was back. “Can confirm that yes, Prime Minister Grist survived. And she’s invited us to a party.”

Leia exchanged a look with Rey, who gave her a small grin.

“Poe, can you do something for me?”

“Go to Grist’s party and tell me what the attitude is there among the guests about the First Order.”

“Well, considering the First Order attacked them, I imagine they’re none too happy right now.”

“Maybe not publicly. You will need to look past their words, Poe. Be alert for the subtler things. Note who still won’t criticize the First Order, or who criticizes too loudly, as if to prove their loyalties. No­tice who’s not at the party. Did anyone declare themselves openly with the separatist faction?”

A moment when Poe was clearly talking to someone else and then, “Cannot confirm. But I’ll keep an eye out.”

“You do that. And see what Grist is willing to commit to the Resis­tance. That was the reason Black Squadron was there to begin with. Your timing ended up being fortuitous, so let’s see if that buys us anything.”

“Okay. Anything else, General?”

“Yes. Have fun. You survived the battle and you’re all still alive for another day. Make sure to enjoy it.”

“Flying’s all the joy I need, but I hear you, General. Copy that.”

“And let me know where Black Squadron will head next. Grail City is a good win, but we have so much farther to go.”

The transmission clicked off and Leia leaned back, the worn chair creaking under her weight.

“Well, that’s good,” Rey said, startling Leia. She’d forgotten the girl was there, she was so quiet.

“But every drop counts, right? A drop here and there and before you know it, you have an ocean.”

An ocean. What did a girl who’d grown up on Jakku know about oceans? But Leia said, “I like the way you think, Rey. Yes, you’re right. No need to minimize what Poe and his Black Squadron accom­plished. Now, why don’t you get some rest?”

As if on cue, Rey’s jaw cracked in a yawn. “Yeah, maybe I should. I was working on the compressor. The humidity on Ahch-To caused the condensation to build up in the casing. I need to clean it out, find the leak, and seal . . .” She pressed her lips together. “I’m sure you don’t care.” She stood.

“On the contrary, I’m glad you’re taking such good care of Han’s ship.” Leia lifted the cup. “Thank you again for the tea.”

Rey gave her a quick nod and left.

Ahch-To. Of course. That was where Rey had found Luke. Maybe the girl did know something about oceans after all. And perhaps there was a lesson in there for Leia, too.

She shook her head, rueful, and turned back to the communica­tions console. One more attempt, she told herself, and then she’d fol­low her own advice to Rey and try to get some sleep. Today it was droplets, she thought, and tomorrow it would be a river. And per­haps, eventually, a mighty sea that could stand against the First Order. It seemed improbable, but improbable was all she had.

She ran through her list of allies again, starting at the beginning.